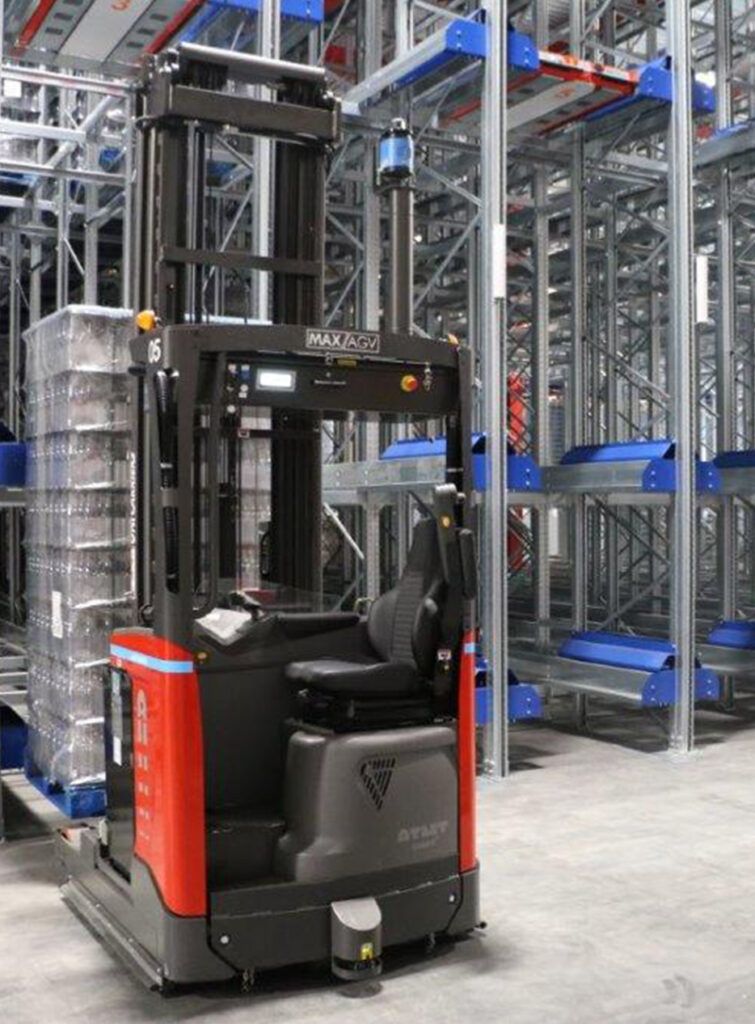 Automated Guided Vehicles (AGVs) have traditionally been small players in the materials handling industry, but not anymore. Melissa Barnett looks at the changing face of the AGV market and some of the factors that are enabling the once-niche sector to expand beyond the factory floor.

Until recently, AGVs were considered useful in mainly large, specialised areas of manufacturing and warehousing, particularly the paper and automobile industries. AGVs came in an impressive range of configurations, but required very specific and costly guidance systems, were expensively bespoke and had inefficient recharging cycles. Smaller operations found they couldn’t justify the return on investment. However, technology has caught up with AGVs and has made them cheaper and more versatile than ever before. With fourth-generation technology and the expansion of the interconnected workplace, it seems that AGVs are perfectly placed to have their day in the sun.

There has not been one specific factor in the recent rise in popularity of AGVs, but rather a series of advantageous and converging opportunities. The burgeoning 3PL logistics and distribution sector, with its 24/7 and seasonally affected operations, requires an enormous workforce. Even in China, this is challenging. According to Wang Yong, senior engineer and deputy director of electric vehicle research at HELI, “besides the shortage of a labour force, the increase of labour costs in recent years has led equipment-use enterprises to take up AGVs. The cumulative operating capacity of AGVs is higher than manual workers; furthermore, the technology supporting AGV systems is becoming more popular and price-competitive”.

Kang Long, deputy general manager of Hangcha AGV, adds that China’s government has introduced multiple policies supporting the development of the robotics industry which, in turn, provides a favourable environment for the development of AGV technology.

“There is a definite upswing as the economy grows, as it has done in the US of late,” says Roland Anderson, president of Amerden AGVs. “When unemployment is low, automation like AGVs will solve a lot of issues and make a company more competitive.”

Flexibility, a word not often associated with AGV systems, is being enhanced in a number of ways, says Phillip Stephan, product manager for robotics at Linde Materials Handling. “Independently operating industrial trucks, which can be flexibly integrated into existing intralogistics systems and gradually expanded in number, are meeting with steadily growing customer interest,” he says.

One of the consequences of the fourth technological revolution (Industry 4.0), is that technology is becoming cheaper and more accessible.  Neil Beveridge, automation engineer for Toyota Material Handling Australia, says: “The technology within automated vehicles has become more affordable as the industry has developed, making vehicle automation a much more attractive investment. The gap between vehicle automation cost and labour cost is ever-closing worldwide, which will contribute to exponential growth of the sector. The affordability really puts vehicle automation on the front foot when comparing with fixed automation.”

Industry 4.0 has had a significant effect on the attractiveness of AGVs in a range of industries and businesses. When connectivity, the Internet of Things and the Internet of Systems merge, it results in some very smart equipment.

Kari Johansson, solutions management director for Finnish company Rocla Oy/AGV Solutions, believes that the AGV market is growing and technology is developing at the same pace. He notes that when integration is seamless, customers can combine different modules together easily and reduce the high ICT cost that integration may have had in the past.

“Sensor and navigation technology development have helped, but the biggest developments have happened in software.’’

‘’The AGV industry must respond to a challenge to make systems easy and seamless to integrate to customers’ control systems. Rocla is developing this integration level, not only upwards to the enterprise resource planning system (ERP), manufacturing execution system (MES) and the warehouse management system (WMS), but also horizontally between automation systems,” Johansson says.

Technology has enabled AGVs to grow marketshare in non-traditional areas such as warehousing. Beveridge believes that vehicle automation is becoming more accepted by a wide range of industries, and end-users are increasingly trusting in the technology to deliver precision, optimisation and safety over manual forklifts. “In recent years, there has been a large shift towards automating warehouse logistics where conventional forklifts are predominately used. This has been due to a number of factors such as the availability of

Hybrid AGVs with vision-aided load handling, intelligent integrated logistics allowing scalable solutions and large fluctuations in throughput demands leading to labour issues,” he says. Beveridge adds that introducing vehicle automation into these traditional forklift areas is also a more cost-effective solution than fixed automation, as it is less intrusive to the existing operations and the ROI is often as low as one to two years.

Different types of technological progress have different effects on AGV development. Wang believes that technology has enhanced the adaptability of AGVs in different applications and expanded the AGV market. “Technology has reduced the cost of products and made them more competitive; for example, technical progress in AGVs has made it possible to replace traditional forklifts in warehouse logistics applications,” he says.

In the warehouse environment, speed and efficiency are key. Anderson believes that advances in navigation have made AGVs highly competitive. “The Amerden Kollmorgen Natural Navigation (NN) system is being constantly improved to be used in dynamic areas, such as warehouses where the load volume varies a lot. NN is making a big impact on implementation speed and accuracy. The software modules have become more standard and dispatch and traffic routines are configured automatically by downloading a detailed CAD drawing. A complex AGV system with many intersections, which in the recent past would have taken months to be completely debugged, now takes only weeks,” Anderson says.

A great step forward, according to Linde’s Stephan, is the fast and easy installation process of AGV systems. Linde’s process involves analysing the material flows on site, in consultation with the customer. Once the planning phase is complete, the equipment can be installed within just a few days. “On the horizontal level, the contour-based geo-navigation system guides the AGVs safely and route-optimised through the warehouse without adding additional infrastructure for orientation. A navigation laser permanently scans the surroundings within a 360 degree radius to orientate itself in space. Sensors attached to the truck and fork carriage ensure that pallets are placed or picked up safely and in the right place. In addition, three-dimensional cameras are used to detect the storage location on the shelf and adjust the position of the forks using the side shift. Integrating the vehicle into the operational flow data is achieved by means of Linde’s Robot Manager,” he explains.

One of the persistent complaints regarding AGVs was their lengthy development cycles. Beveridge believes routing and traffic control were the main factors behind this and that being able to reduce the reliance on custom traffic algorithms is the key to minimising the system development cycle. “Toyota has developed an intelligent integrated intralogistics platform, T-ONE, to manage automated operations. T-ONE utilises real-time automated routing and control methods continuously scanning the system and adapting to changes or blockings of the planned travel path, optimising order processing time and overall vehicle efficiency,” Beveridge says. He adds that the system is installed as an integrated layer of communication with the Toyota Autopilot AGVs and the customer’s existing systems.

Collaboration seems to be the catchword for the future of AGVs. Some believe the industry needs a dual-vehicle system where both operate in harmony, like collaborative robots, but collaborating with other equipment. Already there are dual-purpose forklifts that can be manual or automatic. Stephan believes to increase productivity, communication between machines, mobile robots and humans is essential, particularly in intralogistics.

Hybrid AGV guiding systems are already being used in certain circumstances, says Anderson. “Collaborative equipment onboard AGVs also already exists – side-shifting forks, top clamps and clamps to up-end or down-end rolls, for example. Perhaps we will see a combination of laser navigation and natural navigation being used in the future,” he suggests.

“Increased horizontal integration is certainly important in the future. It gives customers better tools. Collaboration will not be limited to between automation systems but also with manual forklifts,” Johansson believes.

Wang says the future of AGVs will be highly information-based, automated, intelligent and highly adaptive systems. “From the perspective of resources, the integration of technology and capital and the complementarity of resources and markets will definitely generate development of the AGV market,” he notes.

AGVs are looking at a huge market in China, says Hangcha’s Long. “With vigorous promotion of national preferential policies, more people begin to understand the emerging AGV product, particularly in the e-commerce, photovoltaic and logistics sectors,” he says.

“Hybrid equipment is currently extremely attractive to the industry due to its ability to be used manually. This helps in transition between manual and autonomous processes. End-users are far less threatened by the introduction of hybrid vehicles as there is always a manual roll-back option,” says Beveridge. He adds that lean logistics and a continuous flow is challenging at present, but believes he has the solution – teamwork between vehicles thanks to artificial intelligence, sending the right vehicle to the right place at the right time, for a maximum value-added operation with extreme optimisation, and zero waste in energy, time and space.

These are lofty aspirations for any equipment supplier, but one that the current and future series of automated guided vehicles might well be able to rise to.

This website uses cookies to improve your experience while you navigate through the website. Out of these, the cookies that are categorized as necessary are stored on your browser as they are essential for the working of basic functionalities of the website. We also use third-party cookies that help us analyze and understand how you use this website. These cookies will be stored in your browser only with your consent. You also have the option to opt-out of these cookies. But opting out of some of these cookies may affect your browsing experience.
Necessary Altijd ingeschakeld
Necessary cookies are absolutely essential for the website to function properly. These cookies ensure basic functionalities and security features of the website, anonymously.
Functional
Functional cookies help to perform certain functionalities like sharing the content of the website on social media platforms, collect feedbacks, and other third-party features.
Performance
Performance cookies are used to understand and analyze the key performance indexes of the website which helps in delivering a better user experience for the visitors.
Analytics
Analytical cookies are used to understand how visitors interact with the website. These cookies help provide information on metrics the number of visitors, bounce rate, traffic source, etc.
Advertisement
Advertisement cookies are used to provide visitors with relevant ads and marketing campaigns. These cookies track visitors across websites and collect information to provide customized ads.
Others
Other uncategorized cookies are those that are being analyzed and have not been classified into a category as yet.
OPSLAAN & ACCEPTEREN